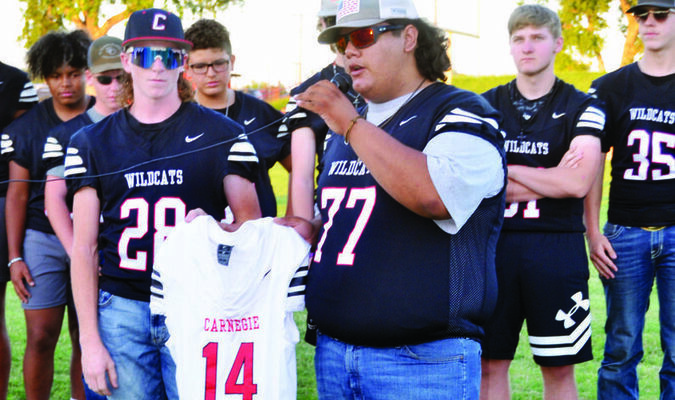 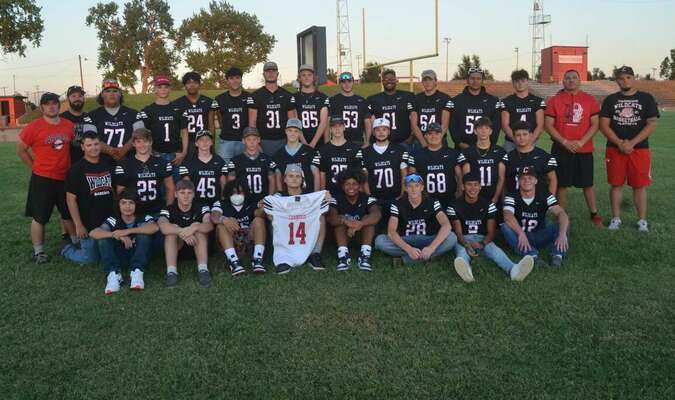 The members of the Carnegie High School Wildcats' football team gathered in the locker room at Wildcat Stadium prior to the start of the annual Meet The Wildcats Ice Cream Social last Wednesday and prepared to meet the small crowd. Prior to the start of the event, the team pulled out the white jersey worn last fall by Phoenix Lawrence so every member of the squad could be recognized. As they made their way onto the field, seniors Quinton Ceballos and Trevor Clifton held the jersey for everyone to see.

"This is for our teammate and our brother," said Ceballos during the player introductions.

Lawrence, who would have been a sophomore this season, passed away earlier this summer in a fishing accident.

" I didn’t get a chance to get to know Phoenix," he said, However, I do know what it’s like losing a teammate and a classmate. I thought the kids honoring him was the right thing to do and we are all better for being a part of it."

Carnegie Superintendent Eric Smith also said he was pleased, and supportive, of the players' gesture.

"I was for it," he said. "What's most important is helping our students deal with a tragic loss and however they need to do that, if that is carrying his jersey in remembrance so we don't forget how fragile life is then that's what we do."

Smith said the loss of Lawrence impacted everyone in the community, even himself.

"I coached Phoenix that first year I was here and though he was undersized, he had the heart of a Lion and always gave it his all," he said, "He was one of mine and will always have a special place in my heart."

CHEERIN' WITH THE CATS

Emotions boil over as board passes on grant for... 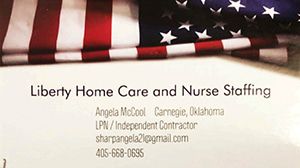